At least some prostitutes have a sense of humor.[1]

A Tuesday evening press release published by PR Newswire announced that the winner of Girls Gone Wild’s “Search for the Hottest Girl in America” would land in an unlikely place: an office on Capitol Hill.

Not only would she win the coveted title of “Hottest Girl in America,” she would also get a four-week internship in the office of Arkansas Democratic Sen. Mark Pryor.

To be clear, I know of no credible allegations that Arkansas Democratic Senator Mark Pryor has ever sold his body for the sexual pleasure of paying customers.  Any implication that Pryor is a prostitute arises naturally from his status as a United States Senator. It isn’t his virtue that Pryor sells: He had to sell that to be elected in the first place.  No, if Pryor is a prostitute, it’s because he daily sells his vote to the highest bidder in return for campaign contributions. 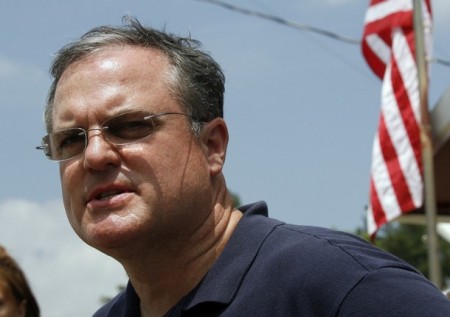 The release itself, to be clear, does not directly call Mark Pryor a prostitute.  It merely takes advantage of justified public cynicism[2] about Congressional morals[3], and perhaps Arkansas politicians in general[4], in a crass attempt to make a buck.

So we’ve established that Mark Pryor is probably not a prostitute, literally speaking.

As for Pryor’s qualifications as a thug, we’re on firmer ground.  He’s called in the Federal Bureau of Investigation, demanding that the author of an obviously parodic press release be prosecuted for “fraudulent impersonation”, “attempted fraudulent sale of a government office”, and unauthorized use of the Great Seal of the United States Senate, whatever that means.

How obvious is it that the press release was a parody?  Judge for yourself[5] by reading the (now edited) original:

According to [Girls Gone Wild founder Joe] Francis, “At this time more than ever, women need strong representation in Washington. Women’s issues and rights have been completely assaulted by the Republican candidates during this year’s Republican primaries.” Francis goes on to say, “When this opportunity presented itself, I felt there was no better way to empower women than to send the winner of Girls Gone Wild’s ‘Search for the Hottest Girl in America’ contest to Washington D.C. I truly believe that women, not men, should be making decisions for women in this country.”‘

No doubt the overreaction on Pryor’s part came from his surprise at learning that Joe Francis is not an advocate for women’s issues, and that “Girls Gone Wild” is not a feminist wilderness conservation society.

Pryor knows that the FBI will inform him that no crimes were committed in the writing of this press release, though it’s certainly possible that tits were shown.  That makes him none the less a thug, threatening criminal prosecution from his perch in the United States Senate over an obvious prank, and wasting the time and resources of the FBI in the bargain, time that agents could have spent on vital government business such as walking illegal guns into neighboring countries, entrapping 17 year old boys in false plots to blow up non-existent buildings, or planting electronic listening devices in houses of worship.

All for nothing: it’s damned hard[6] to make Joe Francis look like a good guy, and Senator Mark Pryor isn’t up to that task.  Unfortunately, it’s easy to make the Senate and Congress look like a corrupt cesspit of bloviating thugs, and for that, I guess, Mark Pryor can be proud.

Acquire this Domain
You can acquire this site’s domain name! We have nurtured its online marketing value by systematically curating this site by the domain’s relevant keywords. Explore our content network – you can advertise on each or rent vs. buy the domain. Buy@TLDtraders.com | Skype: TLDtraders | +1 (475) BUY-NAME (289 – 6263). Thousands search by this site’s exact keyword domain name! Most are sent here because search engines often love the keyword. This domain can be your 24/7 lead generator! If you own it, you could capture a large amount of online traffic for your niche. Stop wasting money on ads. Instead, buy this domain to gain a long-term marketing asset. If you can’t afford to buy then you can rent the domain.

About Us
We are Internet Investors, Developers, and Franchisers – operating a content network of several thousand sites while federating 100+ eCommerce and SaaS startups. With our proprietary “inverted incubation” model, we leverage a portfolio of $100M in valued domains to impact online trends, traffic, and transactions. We use robotic process automation, machine learning, and other proprietary approaches to power our content network. Contact us to learn how we can help you with your online marketing and/or site maintenance.

Your browser sent a request that this server could not understand.
Size of a request header field exceeds server limit.

Your browser sent a request that this server could not understand.
Size of a request header field exceeds server limit.

This website uses cookies to improve your experience while you navigate through the website. Out of these cookies, the cookies that are categorized as necessary are stored on your browser as they are essential for the working of basic functionalities of the website. We also use third-party cookies that help us analyze and understand how you use this website. These cookies will be stored in your browser only with your consent. You also have the option to opt-out of these cookies. But opting out of some of these cookies may have an effect on your browsing experience.
Necessary Always Enabled
Necessary cookies are absolutely essential for the website to function properly. This category only includes cookies that ensures basic functionalities and security features of the website. These cookies do not store any personal information.
Non-necessary
Any cookies that may not be particularly necessary for the website to function and is used specifically to collect user personal data via analytics, ads, other embedded contents are termed as non-necessary cookies. It is mandatory to procure user consent prior to running these cookies on your website.
SAVE & ACCEPT
Generated by Feedzy